What is Basal Ganglia?

The basal ganglia or basal nuclei are group of subcortical nuclei located at the base of the forebrain.

They are significantly united with the cerebral cortex, thalamus, and brainstem. The basal ganglia play a major role in voluntary motor functions, procedural learning, routines or habits, and eye movements. They also have contributions in cognition and emotions [1].

Parts of the Basal Ganglia

This is where the complex or association loop of the basal ganglia traverses as it receives input from the association areas of the brain to transmit the information to the prefrontal cortex.

This is where the motor loop of the basal ganglia traverses as it receives input from the sensorimotor cortex to transmit the information to the premotor area.

Also known as pallidum or paleostriatum, it is the principal output structure of the basal ganglia.

It is a structure surrounded by the substantia nigra, thalamus, and internal capsules which has a role on action selection.

Its name is derived from a Latin term meaning black substance. It is where dopamine resides. Dopamine is rich in neuromelanin which is rich in dark pigments, hence its name.

Blood Supply of the Basal Ganglia

The perforating branches of the anterior cerebral artery and recurrent arteries of Heubner supply the anterior and inferior heads of the caudate nucleus, anterior limb of the internal capsule, and parts of putamen and globus pallidus.

The anterior choroidal artery and perforating branches of the supraclinoid branch of the internal carotid artery go towards the middle of the brain to supply the medial part of globus pallidus.

Photos of Anatomy of the Basal Ganglia: Where is it Located? 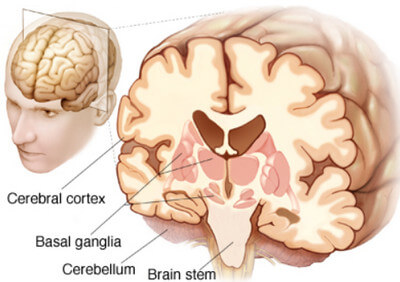 Picture 1: Structure of the Brain and Location of the Basal Ganglia
Image Source: neuroanatomyblog.tumblr.com 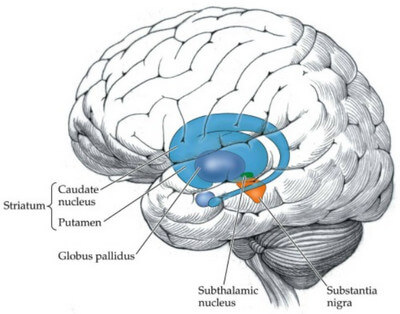 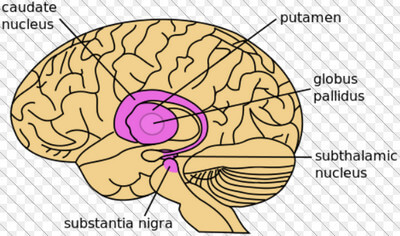 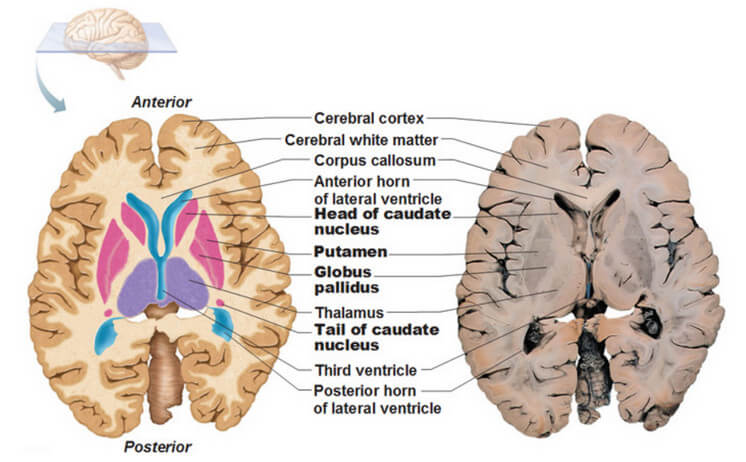 Picture 4: Relationship of the Basal Ganglia to the Thalamus and Ventricles
Parts of the basal ganglia are emphasized in bold letters.
Image Source: antranik.org 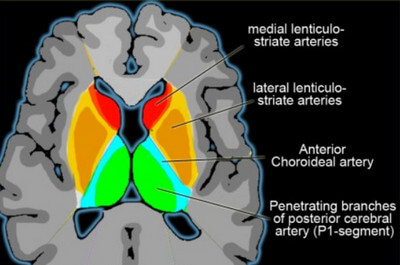 What are the Functions of the Basal Ganglia?

Medically termed cerebrovascular disease or cerebrovascular accident (CVA), stroke is referred to any pathologic disturbance in the blood vessels of the brain causing some parts of it to be deprived of blood and oxygen, resulting to neurologic deficits and possibly death. It may be ischemic or hemorrhagic [5].

Signs and Symptoms of Bilateral or One-Sided Basal Ganglia Stroke

The patient will not be able to normally feel stimuli as he had before the stroke. He may not be able to feel touch, pain, temperature, or pressure in a certain area of his body. He may not even know which body part is being touched.
Speech Problems

Changes in the Eyes

Recurrent artery of Heubner or medial striate artery is a branch of the anterior cerebral artery. Infarction of this blood vessel results to weakness of the face and arm contralateral to the affected side of the brain. Cognitive and behavioural abnormality may also be observed. The infarcted parts include the anterior part of the basal ganglia, inferior frontal lobe, and anterior internal capsule [2].

A group of signs and symptoms including sensory loss, pain, dysesthesia, choreoathetosis, tremor, and hemiparesis occur if thalamogeniculate artery is occluded. Hemiballismus is an additional symptom if the subthalamic nucleus and globus pallidus are affected.

It comes from the root words “chorea” which is an uncontrollable, rapid movement and “athetosis” meaning twisting and wiggling movement of the hands and feet. During prolonged activity, choreoathetosis seems to trigger ischemia of the anterior basal ganglia [5]. 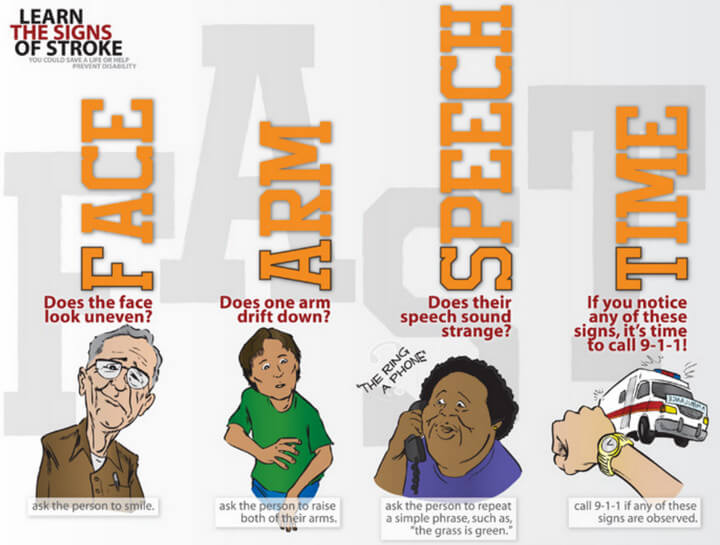 Remember the image above. If there is someone with you and they manifest these signs, you better act fast and rush to the hospital as quick as you can. You may be saving that person’s life.

Once the patient gets into the emergency room, the physician provides measures to dissolve the clot and prevent further clot formation through blood thinning medications. Fluids are administered and vital signs are stabilized. Lowering the blood pressure and intracranial pressure is extremely important.

If not treated by medications, the patient undergoes into emergency surgery to remove the cause itself as it is fatal to the patient if the brain does not get enough blood and oxygen. Time is of the essence because the longer the brain becomes deprived, the higher the chance of disability and mortality.

After recovery, the patient gets into different kinds of therapies, depending on severity of damage the stroke. He signs into physical therapy, speech therapy, occupational therapy, and others which may help him regain his former functions. The goal here is to optimize the patient’s capabilities so he can live his life to the fullest.

It is also very important to prevent it from happening again by stabilizing the blood pressure and avoiding all the risk factors.

Any forms of CVA are dangerous to face. The best way to never experience stroke is prevention. In order to do that, risk factors (as enumerated in the earlier section of this article) to stroke should be eliminated.

The physician’s prudence in the identification of early signs of stroke such as transient ischemic attack (TIA), carotid artery stenosis, and atrial fibrillation is a very important element in saving a patient’s life [5].