Location and Pictures of Different Organs In The Abdomen

Areas of the Abdominal Region

The region of the trunk that lies between the diaphragm above the pelvic inlet below is referred to as Abdomen that is divided into nine regions by two vertical and two horizontal lines. Each vertical line passes through mid-point between anterior superior iliac spine and symphysis pubis.

The Transpyloric Plane that lies at the level of Lumbar plexus L1 passes through the tips of 9th costal cartilages on the two sides (The point where the lateral margin of Rectus Abdominis andLinea Semilunaris crosses the costal margin).

The Inter-cristal plane passes across the highest points on iliac crests.

Boundaries of the Abdomen

It is bounded above the thoracic cage and below the abdominal muscles and fascia.

It is bounded by Lumbar vertebrae, crura of diaphragm, psoas and quadratus lumborum muscles and posterior part of iliac bones.

It is yet again bounded above the thoracic cage and below by abdominal muscles and fascia.

It is bounded by diaphragm.

It continues with pelvis. 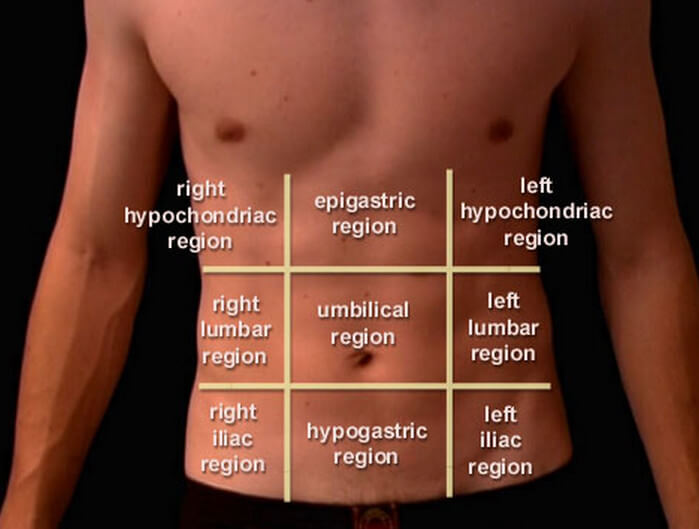 Stomach is a muscular bag forming the most distensible part of the Human Digestive System. The regions occupied by stomach are epigastric, umbilical and hypochondriac regions. It lies between the esophagus and the duodenum on the upper-left portion of the abdominal cavity.

Stomach is divisible into cardiac portion which in turn is divided into fundus and body whereas the pyloric division of the stomach is further sub-divided into pyloric antrum and pyloric canal. A small part of the posterior surface of the stomach is in direct contact with the left crus of the diaphragm, cranial to the gastrophrenic ligament. 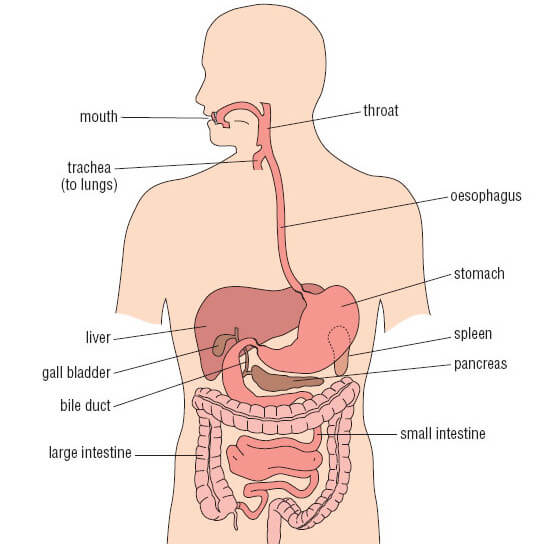 Picture : Stomach location and its relations with various other organs 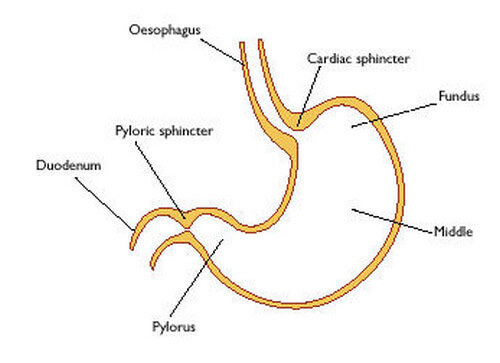 Picture: Stomach Anatomy and its parts

Location of the Intestines

It is about 6 meters (20 feet) long and extends from the pylorus of the stomach to the ileocecal junction.

The small intestine is divided into

2. Lower mobile portion in which

It’s a C-shaped tube and is about 25 centimeters (10 inches) long. It extends from the pylorus to the Duodeno-jejunal flexure. Duodenum lies above the level of umbilicus, opposite vertebrae L1, L2 and L3. it occupies the epigastric and umbilical regions. Duodenum is divided into four parts.

It begins at the pylorus and is approximately 2 inches long. It lies on the transpyloric plane. It is also known as duodenal cap because of absence of plica circularis being replaced by smooth outline.

Second Part of the Duodenum

The second part of the duodenum begin at the superior duodenal flexure and is 3 inches long. The main pancreatic duct and bile duct pierces the postero-medial part at the mid-point. It is retro-peritoneal and fixed.

Third part of the Duodenum

It is 3 inches long and is fixed and retro-peritoneal. It begins at the inferior duodenal flexure.

Fourth part of the Duodenum

It is retro-peritoneal and 2 inches long

It is the upper 2/5th mobile portion of small intestine and occupies the upper-left region of the abdomen and usually begins at the duodeno-jejunal junction.

It is the lower 3/5th mobile part of the small intestine and occupies the lower right portion of the abdomen. Ileum ends at the ileocecal junction. 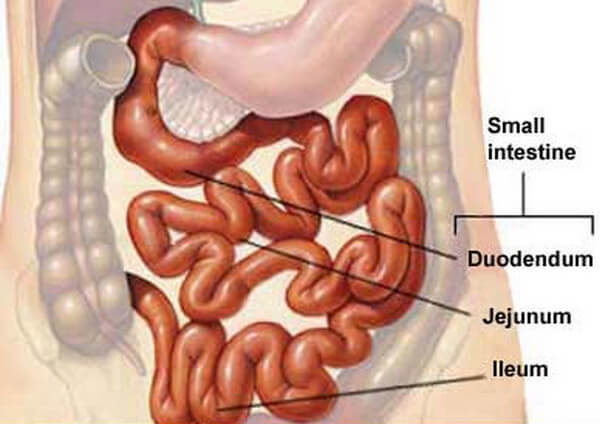 It is located in the right iliac fossa. It is 6cm long and 3 inches wide. It is one of those organs of the body that has greater width than length besides prostate.

Lying in the lower right quadrant, it extends upward from the ileocaecal junction to the inferior surface of the right lobe of the liver / right hepatic flexure.

It occupies the umbilical and hypo-gastric regions and extends from hepatic flexure to splenic flexure.

It extends downward from left colic flexure to the pelvic brim. 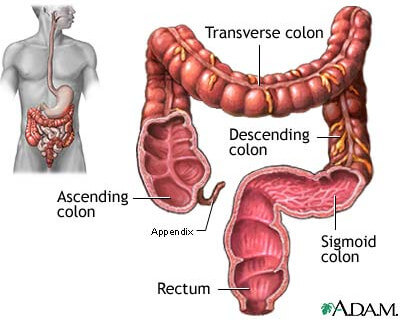 Liver occupies the whole of the right hypchondrium, the greater part of the epigastrium and the left hypochondrium. 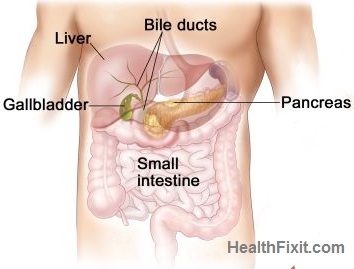 Picture : Location of liver and its relation with other (main) abdominal organs

Structures Which Divides Liver into Lobes

The Porta Hepatic of Hilus of Liver is found on the postero-inferior surface and lies between caudate lobe above and quadrate lobe below and in front. Margin of porta hepatic provides attachment to lesser omentum.

It is located on postero-superior surface of liver. 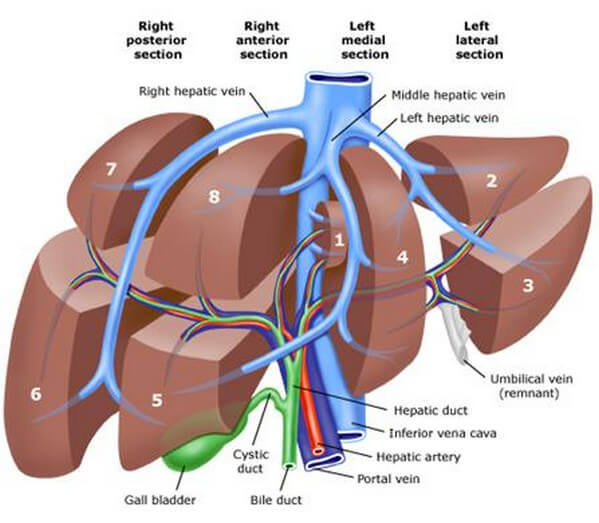 It is a bile-reservoir and has a pear-shaped structure. It has the capacity of about 30 to 50ml. Gall-bladder is located in the fossa on inferior surface of the right lobe liver. It is divided into fundus, body and neck.

It projects beyond the inferior border of the liver in the angle between the lateral border of the right rectus abdominis and the 9th costal cartilage. Fundus is completely occupied by peritoneum.

It lies in fossa for the gall-bladder on the liver. Its superior surface is devoid of peritoneum whereas the inferior surface does posses peritoneum.

It is the narrow upper end of the gall-bladder. It is situated close to the right end of the porta hepatis. Its junction with cystic duct is marked by a constriction.

It is partly endocrine and partly exocrine. Pancreas lies more or less located transversely over the posterior abdominal wall at the level of Lumbar plexus’ segments L1 and L2. It is divisible into head, neck, body and tail.

It begins at the tail, runs along the entire length of the gland and opens into the second part of the duodenum with bile duct on the major duodenal papillae.

Just incase if it’s present, it begins in the lower part of the head, opens into the duodenum at a short distance above the main duct on the minor duodenal papillae. 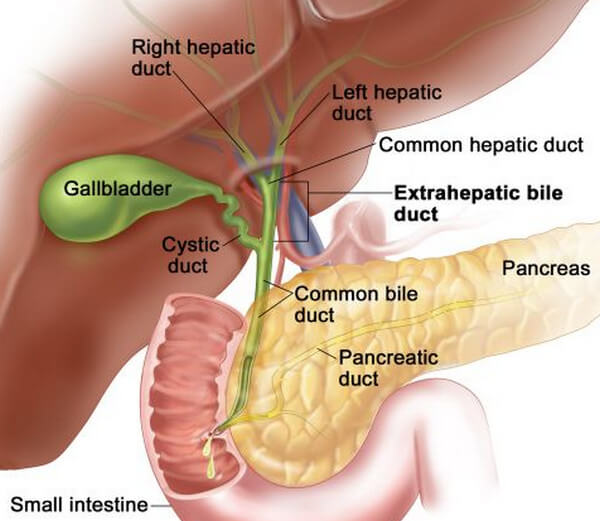 Picture : Location of Gallbladder and Pancreas

Arising from the postero-medial wall of the ceacum, it is a worm-like diverticulum and is about 2cm below ileocaecal valve. It is 8-13cm (3-5 inches) in length. The appendix lies in the right iliac fossae. It has lost all its functions through the process of evolution and is widely considered to be a superfluous structure in the human body. 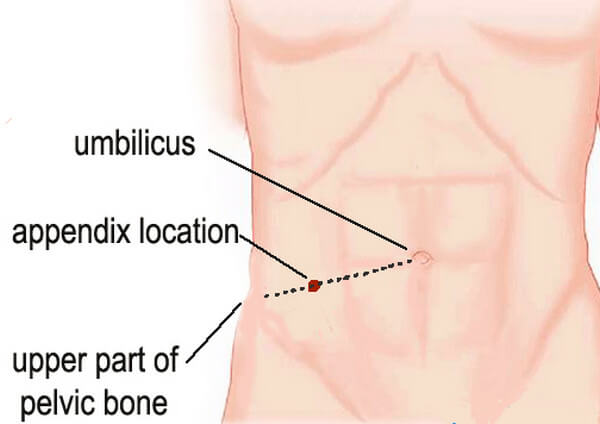 Spleen is the biggest lymphoid organ present in the upper far left portion of the abdomen in the left hypochondrium and is surrounded by peritoneum. Spleen is 1 inch thick, 3 inches broad and 5 inches long. The enlargement of spleen is referred to as splenomegaly. 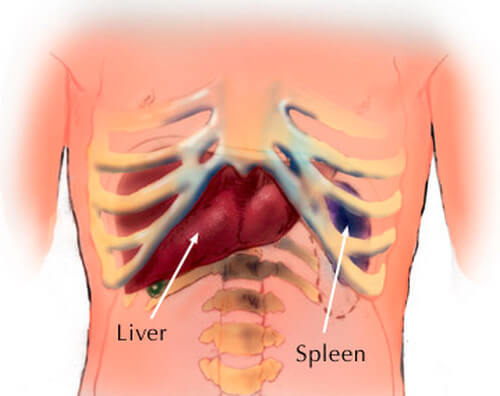 Kidneys are bean-shaped, brown-colored vital organs that occupy epigastric, hypochondriac, lumbar and umbilical regions. Vertically, they extend from the upper border of vertebrae T12 to the centre of the body of L3. External features of kidney have two poles, two borders and two surfaces. 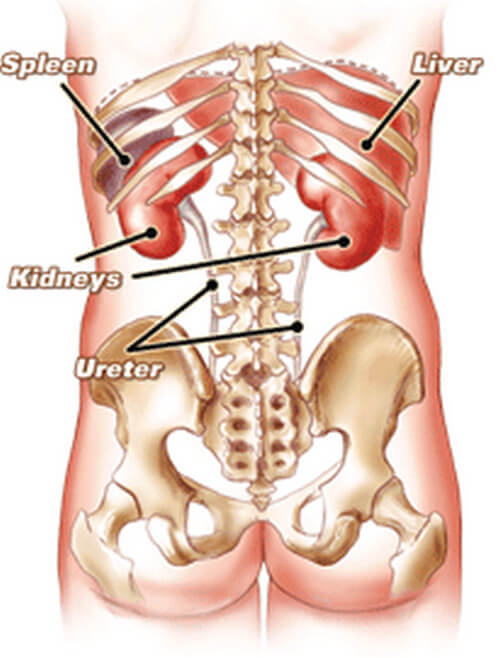 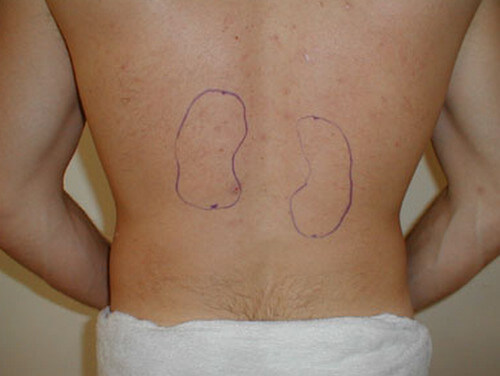